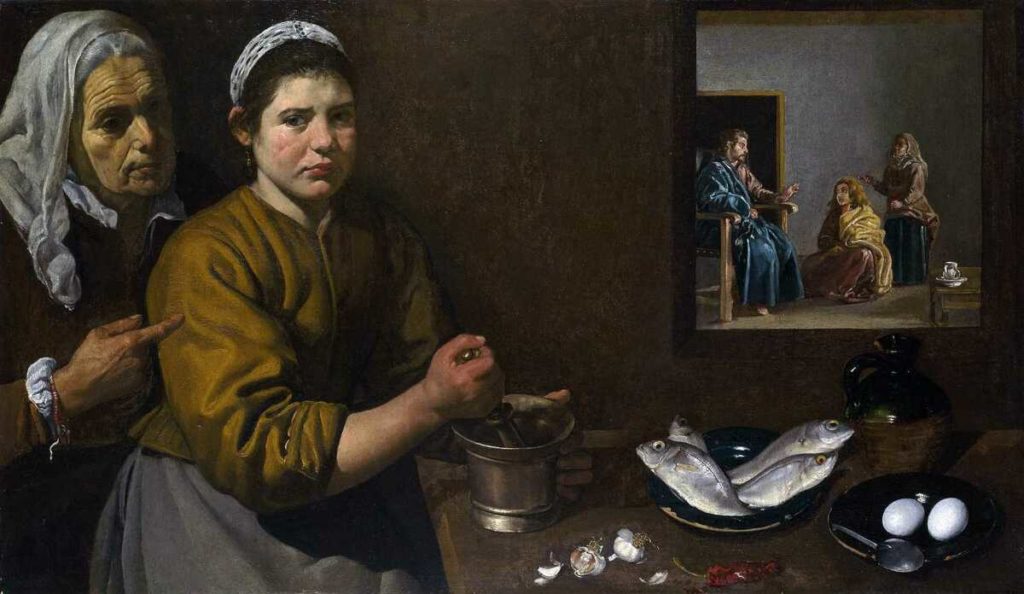 Christ in the House of Mary and Martha, Velázquez, 1618

Incredible story. One of our two great pastors, Fr Wee, told us in his Sunday sermon of the few months he spent with a living saint priest on the Thai/Malaysian border. Thick jungle. No food except boiled rice and vegetables. No salt, pepper, tea, coffee, milk, anything, or computers, phones, etc.

Fr W could tell he was a saint by (inter alia) his mastery over the local wildlife. There were man-eating tigers around. If one bounded up to him, fancying a brunch snack (Fr S was only 5 feet tall), Fr S would simply turn around, face the tiger, make the sign of the cross, and the tiger would sneak shamefully away. He did the same with the huge python snakes that abound. He was getting in his car and a cobra rose erect, poised to strike. Fr S said “Get out of here! You don’t belong!” The cobra slithered away.
Fr Wee’s point was that when you reach the height of sanctity, as described in St Teresa’s The Interior Castle or in Thomas Aquinas, you may display the prelapsarian (pre-fall) lordship over creation that Adam had. As with this priest, or St Martin de Porres, or St Francis, St Jerome, St Collette, or countless others. Including some really holy guy in Christchurch, N.Z., who prays in his backyard, and birds come and perch on his shoulders.

I clearly have a way to go. My cat disobeys every command I give her.

Excess sadness is a disease of the mind, but mild sadness is the mark of a well-conditioned mind, according to the present state of life.