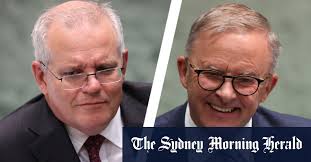 I watched, reluctantly, the first “debate” between the Prime Minister and the Leader of the Opposition, and this is what I now find out from the papers: Undecided voters give win to Anthony Albanese after leaders’ debate. This was the final tally:

Of the 100 undecided voters at the debate, 40 per cent gave the debate to Anthony Albanese, 35 per cent to Mr Morrison and 25 per cent remained undecided, results show.

Of course, no one is actually undecided. You may be sure that at least 40% were ALP voters since there is no way to really keep them out. An undecided is someone who says they remain unsure, but anyone who watched the flow of words and thought the ALP leader was the more persuasive has demonstrated a decided lack of grasp of the issues, or has very little idea of what will make their lives more secure or more prosperous.

Let me end with this, which is in all essentials the promise being made to Australians by the ALP: however bad things are now, we will make them worse, or as it says at the link but in reference to the US: Red states [ie States governed by Republicans] top blue states [ie states governed by Democrats] for low taxes and best economies.

The ALP plan, as usual, is to introduce some unaffordable freebie welfare program, then lose government and let the Libs work out how to pay for it.

Of course, the ALP pitch is to say that had they been the government everything would have turned out better than they have. Meanwhile, they promise to fix our non-existent global warming problems by crashing our carbon-based power-generating system, and will eliminate the non-existent racism that supposedly ruins social relations in this country by blaming everything on people who ancestors have come – either recently or in the distant past – from Northern Europe.

Love is not blind; that is the last thing that it is. Love is bound; and the more it is bound the less it is blind.