What should one make of this: ‘No need to rush’: Senator warns of FDA’s shortcuts to full approval of COVID-19 vaccine.

Sen. Ron Johnson called out the Biden administration’s health agencies Sunday for shortcutting the usual safety reviews in a rush to give final approval to COVID-19 vaccines, including failing to account for thousands of deaths and adverse reactions among people worldwide who got the shots….

He said the fast-track decision appeared more political than scientific since it skipped the usual formal advisory committee meeting and did not fully account for the reports of deaths and disabilities suffered by people after being vaccinated.

There is then this which I find of more than just slightly interesting. From HOSPITALS IN DARK OVER JABS in the Herald-Sun.

An unvaccinated doctor at a major Melbourne hospital is reportedly lying to her bosses about having had the vaccine.

Her mother revealed the deceit in a Reignite Democracy Australia group chat, saying: “She’s now telling people she’s had it; she’s using this as a strategy to get people off her back.”

Aside from this doctor having such a repulsive mother, the real question is why she doesn’t wish to be vaxxinated. That would be a much more interesting story even if it might be contrary to the political narrative of the moment. And interestingly, the full story is that hospitals cannot find out which members of staff have been vaxxinated. I wonder what their un-vaxxinated staff members know that we don’t know but perhaps should know.

Let me also add this: Hundreds of doctors sign open letter to PM: Need debate on ‘flawed covid guesses’. It comes with this at the end, which suggests there may be others who have the same view but are keeping quiet.

The signatories, from a broad range of specialities, came forward despite the risk of doing so to both their jobs and reputations.

And this is what the view was of those who did speak up.

A hundred and thirty three doctors, nurses, psychiatrists paramedics and midwives signed the letter released today which states that despite a “complete lack of widespread approval among health professionals,” of the pandemic policies, “no attempt” has been made to measure the harms of lockdown policies. The letter, also addressed to the Health Secretary and First Ministers for Scotland, Wales and Northern Ireland states: “You have failed to engage in dialogue and show no signs of doing so. You have removed from people fundamental rights and altered the fabric of society with little debate in Parliament.

And this, which is just another example of how ridiculous Australia is increasingly seen by the rest of the world: The Taliban are beating fewer people in Afghanistan than police in Australia. Comes with this picture. 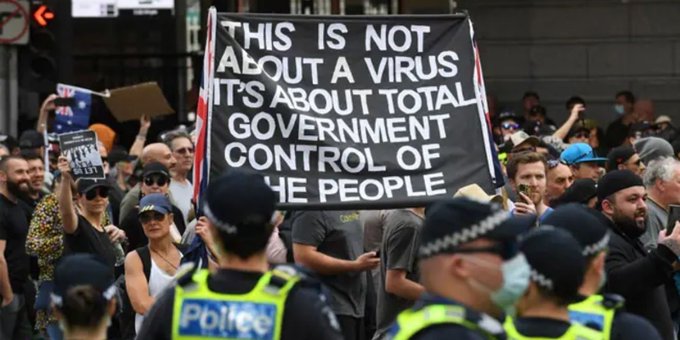 AND I MEANT TO INCLUDE THIS FIRST: FDA Ignores New UK Study Showing Pfizer Vaccine Destroys T Cells, Weakens the Immune System. Begins with this:

Editor’s Commentary: The FDA is expected to fully-approve the Pfizer Covid-19 injections this week in spite of a new study coming out of the United Kingdom that shows they may be the most dangerous of all the shots in mass circulation today.

This is not an accident. Pfizer isn’t the first to get the approval out of luck, bribes, or cronyism. They definitely didn’t earn it through effectiveness; as bad as the numbers have been for all of the so-called “vaccines” throughout the rise of the Delta Variant, Pfizer’s have been by far the worst. And that’s the point.

Tradition means giving votes to the most obscure of all classes, our ancestors. It is the democracy of the dead. Tradition refuses to submit to the small and arrogant oligarchy of those who merely happen to be walking about.