Australia’s Corporations Rebel Against Government’s Draconian COVID Lockdowns is from Zero Hedge in the US reporting on a story published by the Financial Times in London. It may be in the local press, but I haven’t come across it here. Still, an important story, you would think.

In the letter – which was reported on by the FT – the signatories allege that Australia is making “big mistakes” in failing to reopen to the world. By making the lockdowns so severe (and so unceasingly long), the Australian government is putting politics before the well-being of the Australian people ahead of the federal elections that must be held by the end of May – when the Senate’s present term is slated to expire.

The companies that signed the letter “…employ almost one million Australians” and warned that lockdowns were having “long-lasting” effects on the economy. However, this shouldn’t be news to Australia’s political elite: Economists at Australia’s central bank, the RBA, already lowered their growth projections after a stronger-than-expected Q2 GDP print.

But all the incremental data seen so far suggests that Q3 could be a disaster – well that, coupled with the intensifying economic pressure from Beijing, which is trying to win a geopolitical stare-down contest with the Australian government by blocking a growing number of imports.

As for Australia’s infamous “drawbridge” border policy, the letter’s signatories insisted that the decision to close Australia’s borders was a colossal mistake.

“It’s time for corporate Australia to turn its disquiet and rumblings into a roar,” said Greg O’Neill, the chief executive of Melbourne fund manager La Trobe Financial, one of the signatories to the open letter sent by the Business Council of Australia. “It is time for courage and honesty. Not politics.”

Politics is politics. But courage and honesty would be nice for a change.

This was on the letters page at The Australian today: The Grief of Parents. It is a lament from someone who can find almost no sympathy from anyone who could actually do something. We live in the saddest of times when this is the only avenue for someone to get this message out more widely.

The Grief of Parents

I am a member of numerous support groups for parents of children and young adults who have declared a transgender identity. In all these cases the declaration of a transgender identity has come completely out of the blue, giving parents good reason to be sceptical of their child’s sudden ideation. As parents who have raised and nurtured these young people, we are being increasingly marginalised and undermined by teachers, medical professionals and now the courts.

Our scepticism and calls for caution, due to the irreversible nature of hormonal and surgical interventions, are derided by health professionals who seem to have no qualms about turning these young people against their “unsupportive” parents. Families are being torn apart with the immediate “affirmation” of a nebulous identity by clinicians.

Many parents know their children have been groomed online. Many children come from backgrounds of trauma, such as family separation, bullying or sexual assault. Many are on the autism spectrum. All that parents want is caution, exploratory therapy and a return to the medical ethos of “Do no harm”.

The mental health of these parents is overlooked. They are struggling. Their collective grief is insurmountable. Having our children taken away from us (“Court dismisses appeal in transgender teen removal case”, 29/9) is not the solution. Too many families have already been destroyed by this phenomenon.

What will it take for our health officials to heed the calls of these distressed parents?

On 27 September, 2021, the Fair Work Commission handed down its decision in the matter of Jennifer Kimber v Sapphire Coast Community Aged Care Ltd(C2021/2676).

While the case concerned the ‘flu injection’, the Commission in its Decision, focused on  COVID-19 mandatory vaccinations.

The following verbatim excerpts taken from the Decision and brought to the public’s attention by Tanya Davies BAppSc (Phty) MP (Liberal), possibly the only END_OF_DOCUMENT_TOKEN_TO_BE_REPLACED

Look what the man who signed a contract for submarine delivery in the great by and bye has to say: Scott Morrison put national security at risk.

Former prime minister Malcolm Turnbull has claimed Prime Minister Scott Morrison put Australia’s national security at risk in the way he has handled the decision to dump a $90 billion submarine contract with France and instead build a nuclear-propelled fleet with the United States and Britain.

Mr Turnbull also revealed that he has spoken to Emmanuel Macron since the shock announcement two weeks ago, despite Mr Morrison being unable to get the French President on the phone.

Reminds me how grateful we should be that Malcolm is no longer even in Parliament. As was said at the time:

It was worse than that, but you get the point.

Hardly news to notice that the ABC is run by far-left idiots who are, no doubt at all, fully in sync with the Victorian Labor Government but really this is way over the top. Victoria records 950 COVID-19 cases and seven deaths as some restrictions ease slightly. This is the state of catastrophe they record.

The deaths of seven people with COVID-19 is the worst day for fatalities of the current outbreak, and brings the number of deaths from the third wave to 36.

Not exactly cut down in their prime of life, were they?

Then there was this: 78% of Victoria Aussies hospitalized with COV are fully vaccinated, another17% took one dose.

Victoria Health Minister Foley announced 867 new COVID cases were recorded yesterday.  Foley said 375 people are hospitalized, 81 people are in intensive care and 61 people are on a ventilator.   Among  the recorded cases “78% of the hospital cases are fully vaccinated, and 17% are partially vaccinated (1 dose).”

In other words,  95% of the COVID patients in Victoria hospitals are at least partially vaccinated….

Meanwhile, Victoria’s repulsive Premier is hesitant about rolling out the vaxxines with the Herald-Sun front page discussing the Federal Government urging Victoria to get on with the vaxxinations while the state is taking its foot off the pedal (the footie comes first, naturally). 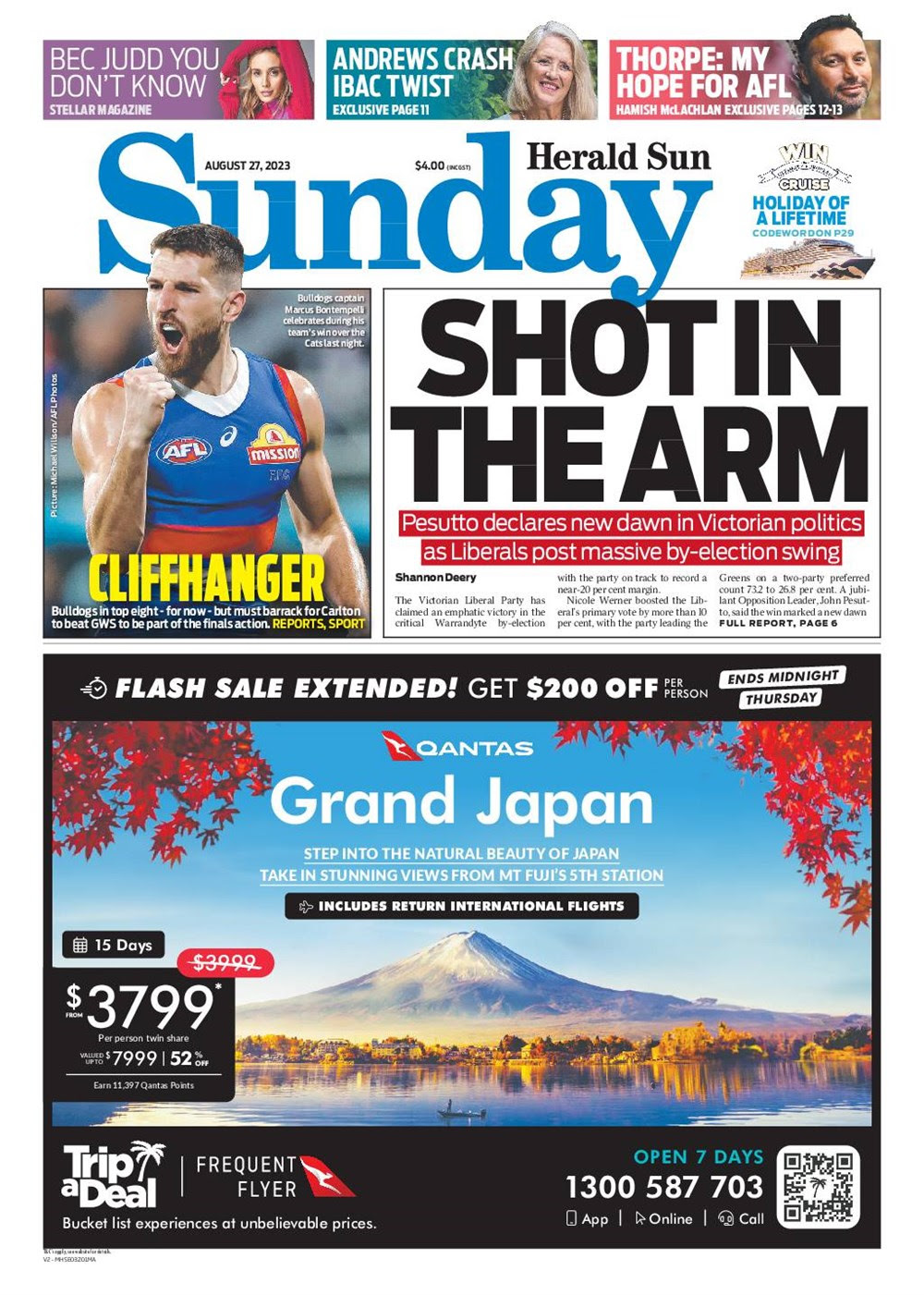 (Goes without saying: Not medical advice)

There has been a disturbing trend on Catallaxy in the last week of previously stout men saying they cannae go on Jim, because their wives insist they get the vax for the good of their status in society, or for Facebook, or for the next PTA meeting or some shit like that. Men who said they would never take this thing, ever, and never, never, never let their kids get it.

END_OF_DOCUMENT_TOKEN_TO_BE_REPLACED

Imagine what it would be like if you have to sign into every place of business you enter, with technology that tracks your movements and is linked to your home address and unique identity.

END_OF_DOCUMENT_TOKEN_TO_BE_REPLACED

Just to give you an idea of the interest in these no jab, no job issues, around 4,500 people watched live today. (Youtube linked above). There were two END_OF_DOCUMENT_TOKEN_TO_BE_REPLACED

All men who have ideals . . . live by some kind of faith, by committing themselves to some kind of loyalty which is not universally recognized as the common property of all thinking men. They must have something-something outside themselves, to make them feel life is worth living, that good rather than evil is the explanation of the world.

“We refuse to become the vaccination police for any government,” In-N-Out’s Chief Legal and Business Officer Arnie Wensinger said in a statement. “It is unreasonable, invasive, and unsafe to force our restaurant associates to segregate customers...”
https://www.sfchronicle.com/food/article/In-N-Out-blasts-S-F-over-vaccine-mandate-16546650.php

Now the truth starts to come out. This is why the Government can never mandate covid-19 jabs. They don't provide protection. They don't stop transmission and now all the sheep have to line up to get boosters.

Please DO NOT RT this clip of a Biden official criticizing the religious beliefs of federal workers on abortion. Devout Catholic Joe Biden would be very upset!

In Quebec the “vaccine passport” system requires not just presenting proof of vaccine, but also a photo ID, which the hostess/security guard is then supposed to cross-check. So funny that you have to go through this elaborate paperwork process to sit and eat fries at a food court