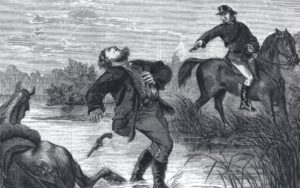 We eulogise our felons such as Captain Thunderbolt as gentleman bushrangers — they gave back a small portion of the money they stole from poor victims, expecting thanks, and absurdly they got it all the way to big brass statues on federal highways.

But unlike Captain Thunderbolt, buried at Uralla in northern NSW, the noble bushranger who has taken out political parties and prime ministers and retreated to his rocky outcliffs with his fully imported Tesla, is still at large — Captain Climate. This romantic outlaw who has stolen so many political careers – former prime minister Julia Gillard, climate change minister Greg Combet, former prime ministers Kevin Rudd and Malcolm Turnbull – is another weather-inspired pseudonym.

Maybe it’s our fascination with bushrangers that spells why we are so obsessed with climate policy.

For previous prime minister Julia Gillard and climate change minister Greg Combet, the carbon trading scheme is now just a scarred chapter in their memoirs, a mourning recital of the day Captain Climate held their government.

In 2008, the Gillard government’s Carbon Pollution Reduction Scheme was to reduce emissions by “at least five and up to 15 per cent below 2000 levels by 2020”.

Our emissions are down 20 per cent since 2005, thanks to regional Australia, where most bushrangers roamed. At the same time, China’s has increased 72 per cent, and India’s has increased by 86 per cent.

China is no developing nation. It is a superpower. Developing countries do not build fifth-generation fighter planes and aircraft carriers. They don’t build infrastructure in other nations and lumber them with massive debt. Developing nations don’t soon have the biggest economy in the world.

According to the United Nations Framework Convention on Climate Change, China’s annual emissions are greater than the entire OECD and projected to grow. Still, we continue to subsidise them with renewable energy technology, which we could manufacture here. In any wind farm in this country, zero per cent of blades, inverters or the guts of wind towers are sourced in Australia

— the only part of a wind farm 100 per cent locally sourced is the concrete it sits on. The problem is global warming of two degrees, and the payment is Australia slashing its economy to net zero emissions by 2050 while we subsidise China to manufacture our demise. China can continue to produce record emissions because it is a developing nation, according to current UN edicts, even though Shanghai is one of the biggest stock markets in the world.

At the very least, Australia should manufacture its renewables. Otherwise, it’s Thunderbolt economics 2.0. Thank you for giving us something back; we’ll build you a monument.

Captain Climate has fawning advocates. NSW Environment Minister Matt Kean is all over this outlaw, promising new jobs and new money and a new future.

The New England energy zone, one of Captain Thunderbolt’s favourite haunts, gets $30 million a year until 2042 for renewables, when this same zone, using this same land for agriculture at the moment, sells $1.8 billion a year in agriculture.

One uses solid Australian Bureau of Agricultural and Resource Economics data, and the other is Mr Kean’s projections based on academic modelling.

The 2800 ongoing jobs on electricity infrastructure that Mr Kean spruiks for regional NSW, uses modelling claiming a 1000mw solar farm would employ 100 people – when they are lucky to have five.

Instead of using ABS statistics, the academic modelling “surveyed” businesses and grossly inflates lived experience of those working on renewable projects.

This bushranger is brilliant. China is sending us their renewable generation plant manufactured with our coal, inspired by our subsidies, paid for by us – the taxpayer. Poor old Thunderbolt would blush – and he got shot by the police for less. What drove the Gillard and Combet tax was fear: The “curtailment of agricultural production and land degradation”.

Now the fear is our trading partners abandoning us. “Getting to net-zero by 2050 is not going to be easy – it is going to require the complete re-engineering of the global economy,” Mr Kean says in his renewables blueprint. He cites our trading partners, such as Canada, for ambitious targets.

Canada, which he heralds as climate angels, has seen their annual emissions rate decrease by only 0.1 per cent per annum compared to our 1.2 per cent. We are doing better than them. Gladys Berejiklian’s resignation is opportunity for the next leader to remove Mr Kean from the energy portfolio, somewhere his pragmatism can no longer threaten regional futures. Latest polling shows the NSW Coalition is on a knife’s edge, losing their rusted-on voters, and the Liberals need a leader who can roam the state repairing their relationship – not a premier who will have to stay in his seat to try to win.

Cutting the world off from warmth mined in Australian soil, as pseudologues will have you believe, will not reduce global emissions as they will find poorer products elsewhere and destroy the income that underpins our pensions, NDIS, defence, health and roads.

Our future floats in Gladstone harbour, not in Glasgow ballrooms where Captain Climate’s energy crisis has them, hostage, choosing between feeding themselves or turning on the heater. Demand is apparently spiking for net-zero by 2050, with no idea how it will be evaluated, the outcome to be gauged, and how it will be measured. We don’t know what the quality assurance will be, and when the evaluation will begin or end or how. This bushranger has held us ransom with terrifying scenarios. We are cowering, but our neighbours are laughing at us.

17 thoughts on “Guest Post: Vikki Campion – Captain Climate’s holding us all to ransom”

To see what is right and not do it is the worst cowardice.