This primer is a summary of the magnificent work of Eugyppius over the last week or so. In a series of posts, principally, here and here, he fashions an argument that a universal vaccination campaign:

may permanently compromise immunity to SARS-2, via Original Antigenic Sin — the phenomenon, long observed in the antibody response to influenza infections, that initial exposure to a pathogen (or a spike protein) shapes all subsequent immune responses to mutated, recombined or reassorted instances of that pathogen. Our Corona vaccines elicit antibodies against the spike protein alone, while natural infection provokes antibodies against other virus proteins as well, including the nucleocapsid or N protein. The broad spectrum of natural immune response is why recovered individuals enjoy much greater and longer-lasting protection, than people who have been merely vaccinated.

Of course, you would imagine that immunologists and public health experts would be well aware of Original Antigenic Sin and the problems it might establish for a universal vaccination campaign. So what was there riposte and what is the counter riposte:

The vaccinators have always insisted that there’s nothing to see here. You can get the spike-specific protection of vaccination, they say, and pick up broader-based protection from low-risk natural infection later on. The problem, though, is that the vaccines appear to influence subsequent immune response, focusing antibodies on legacy spike and making it much easier for SARS-2 to escape immune resistance. Potentially for good, and in billions of people.

Indeed, but that is exactly the problem with Original Antigenic Sin. It appears to sensitize our immune system to the original viral encounter and this encounter subsequently establishes a pattern for all future responses with that virus no matter the variation involved:

The mechanisms of Original Antigenic Sin are not fully understood, but we have a rough idea of what might be happening. When a virus infects your body for the first time, your naive memory B cells imprint on specific virus proteins, or antigens, presented to them. These B cells then become either memory B cells or plasma cells. Forever after, they specialise in producing antibodies against those specific antigens. When a slightly mutated form of the virus arrives, these memory B-cells begin pouring forth the antibodies they learned to produce during the first infection. These antibodies bind to multiple epitopes on the virus particles, and in the process they give the slower-moving naive B-cells little chance to learn about any new, mutant virus features.

Original Antigenic Sin was most influentially described by Thomas Francis in 1960. He noted that, regardless of whatever influenza A strains were in circulation, subjects tended to have dominant antibody responses to the strains that were current in their early childhood:

The antibody of childhood is largely a response to … the virus causing the first Type A influenza infection of the lifetime. As the group grows older and subsequent infections take place, antibodies to additional families of virus are acquired. But … the antibody which is first established continues to characterize that cohort of the population throughout its life. The antibody forming mechanisms have been highly conditioned by the first stimulus, so that later infections with strains of the same type successively enhance the original antibody to maintain it at the highest level at all times in that age group. The imprint established by the original virus infection governs the antibody response thereafter. This we have called the doctrine of original antigenic sin.

And the evidence from Public Health England vaccine surveillance report suggests that this is indeed the case. If you look at two figures Eugyppius includes from the report in the first link, we see two things emerging in England, firstly: 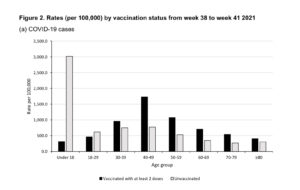 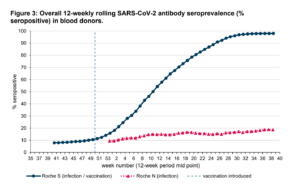 Specifically, the vaccines promote the development of anti-S antibodies but negligible production of anti-N antibodies. In other words, the vaccine has trained a response to COVID that focuses on the spike protein but fails to develop broad-spectrum immunity even if the person is later infected with COVID.

This appears to have been confirmed independently:

We have very little data on the specifics of post-vaccination immune response, but a Twitter informant points me to this piece in the Journal of Infection. It’s a brief letter to the editor confirming the findings of the UK Health Security Agency that breakthrough infections in the vaccinated seem to elicit a vastly attenuated antibody response to the N protein, compared to infections in unvaccinated people. The authors report results from their seroprevalence study of 4000 hospital personnel. At the time, there had been very little vaccine fade and breakthrough infections were rare, so they know of only 23 breakthrough cases. From this small cohort, a mere 6 individuals had detectable anti-N antibodies. They compare this to 663 people with anti-N antibodies from 812 infections in the unvaccinated.

To return to original antigenic sin, the implication of this for immune response is that different generational cohorts will have developed different immune responses to whatever variant of X was prevalent in their childhood:

This is an important if subtle aspect of our population-wide immunity to influenza A. It looks like this:

As older cohorts die, their immunity to older strains dies with them. These old strains, long suppressed, are then positioned to return, for very few human immune systems remember them any longer. Francis believed this was the mechanism underlying periodic cycles of pandemic influenza. The 1957 influenza pandemic, for example, featured a strain of flu against which only the oldest cohorts – those in their 70s – had specific antibodies. As these “immunological veterans” disappeared, this older, long-suppressed type of influenza was free to return and cause another pandemic event.

For further discussion of the above in relation to influenza, return to the second link above here, and scroll down to Lancet (1979) and Nature Medicine (2005) studies. Consider the example of dengue fever and original antigenic sin. There are at least four known variants, but the experience with dengue fever and immune response is:

Once a response has been established, it is unlikely that repeat boosting will be able to change its scope, meaning that balanced responses against the four virus serotypes will need to be established with the first vaccine dose.

This is precisely the danger we are now facing. We are attempting to vaccinate the entire population using a particular feature – the spike protein – of COVID prevalent in 2020. In doing so, we may be, via original antigenic sin, denying the emergence of broad spectrum immunity (in individuals) and layered immunity (across the generations) in our society. As Eugyppius concludes:

Aside from the minority that have managed to recover from natural infection before the vaccinators got to them, most humans will have their crucial, primary immune response conditioned by the spike protein of SARS-2 in its vintage 2020 configuration.

It is a near certainty that this immunity will attenuate antibody responses to the spike protein of current and future variants, forever. Mutant spike proteins will increasingly escape vaccine-conferred immunity, and breakthrough infections will elicit only partial response to the new epitopes. Insofar as the data also suggest that our vaccines will attenuate immunity to other virus proteins beyond spike, mass vaccination will lead to ever more volatile waves of infection – in exchange for limited and fading protection against severe outcomes.

Given the danger of infection to those 50 years or younger, there should never have been any promotion of vaccination in these age groups beyond the high risk groups, let alone a program of mandatory mass vaccination. They should have been earmarked as the group that would gradually become a positive case, fight infection, develop broad-spectrum natural immunity, and by doing so perform an actual service to their community that would have actually been in the public good. What has occurred, health young and middle aged people getting vaccinated, appears to be the opposite of in the interest of the public good, having locked their societies into a never-ending cycle of COVID outbreaks. The only thing possibly in the way of this rolling wave of infection and reinfection are those children under 12 that have yet to be vaccinated. And yet, our political masters seem to be ploughing ahead with vaccinating our near youngest, 5-11, whose risk to COVID is negligible.

The governments of the West have bet on the favourite and not the field; this strategy always ends in tears.

Modern society is hypnotized by socialism. It is prevented by socialism from seeing the mortal danger it is in. And one of the greatest dangers of all is that you have lost all sense of danger, you cannot even see where it’s coming from as it moves swiftly towards you.